This page explains how to setup a Peppol AP from scratch. AP is the abbreviation for Access Point which is the technical endpoint for sending and receiving business documents. See the Dictionary for more abbreviations.

Since 2020-02-01 AS4 is the mandatory transport protocol in the Peppol eDelivery network and AS2 transport protocol got an upgrade to "Peppol AS2 v2" (see details below).
This page was originally created for AS2 and is now partially extended for AS4 - more details to come.

There are a few known possibilities (I'm aware of) on how to build/run a Peppol AccessPoint.

Before you can start you need to have the following information in place:

AS4 as a transport protocol (mandatory)

Peppol adds specific limitations on the usage of AS4. AS4 Messages MUST be signed and encrypted. AS4 messages MUST have exactly one encrypted payload which MUST be a Standard Business Document (SBD). Peppol AS4 message MUST use the MIME encoding for message transmission. 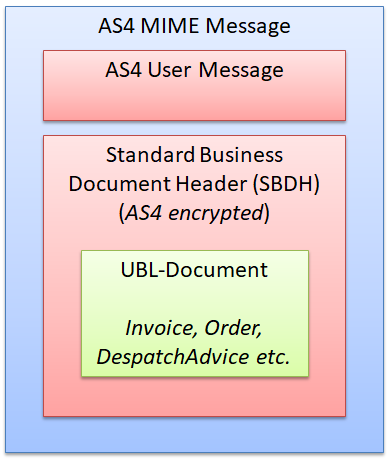 See the official phase4 documentation on phase4-peppol-servlet for details.

See the official phase4 documentation on phase4-peppol-client for details.

AS2 as a transport protocol (optional)

An AccessPoint is a technical adapter for sending and receiving Peppol UBL documents. The following images shows the overall structure of a transmitted AS2 message in a very simplified way:

The outermost container is an S/MIME (Secure / Multipurpose Internet Mail Extensions) message. It is a basic MIME message including signature data. One MIME part of the message is the so called Standard Business Document Header (SBDH). It is a UN/CEFACT standard for merging XML documents with relevant metadata into a single XML document. Peppol maintains its own Envelope specification that is based on SBDH. Finally inside the SBDH the main UBL business document is contained. The complete UBL 2.1 specifications can be downloaded from the OASIS UBL web site.

This section points to projects that help in implementing the different layers of an AS2 message. If you are already familiar with these concepts you may simply skip this section.

An example project that shows how to receive Peppol documents via AS2 can be found in the as2-peppol-server project. It uses as2-lib, ph-ubl and peppol-sbdh to receive messages from arbitrary Peppol AS2 receivers. It requires no external AS2 handler (like Mendelson) and no mandatory database setup. as2-peppol-server is a Java 1.8+ project and licensed under Apache 2.0 license.

Detailed setup description can be found directly on the as2-peppol-server project page.

An example project that shows how to send Peppol documents via AS2 can be found in the as2-peppol-client project. It uses as2-lib, ph-ubl and peppol-sbdh to send messages to arbitrary Peppol AS2 receivers. as2-peppol-client is a Java 1.8+ project and licensed under Apache 2.0 license.

The steps to send a document are outlined as follows: